For the first game of the series, see Sonny.

Sonny is the main protagonist of the series. Like all the male characters, he is voiced by Andrew Dennis.

Sonny is an intelligent zombie, with the capacity to speak and behave like a normal human being. He is one of the few known zombies to be intelligent, including Veradux and Felicity, being able to live and interact like normal humans.

Details about his life before he was zombified are almost totally unknown. Both his zombification and death probably happened on the research ship White November, which is also the place where he was revived by Louis the Blind or Louis.

The reason of his death is unknown, but it could have been from being attacked by the Zombies and Metabiis on the ship. His identity before his zombification and death is also kept totally untold, and Sonny himself doesn't have any memory of his life or about himself before these events. The possibilities of his identity are vast, as he could have been anyone on and off the ship - one of the crew, a passenger, a researcher, or someone else.

It's possible that he and Louis knew each other before Sonny lost his memory, possibly as friends, as Louis had told Sonny that he was a friend when Sonny asked who he was.

Once Sonny is brought back to life by Louis, the two of them attempt to escape White November together on a speedboat. They fight their way to the speedboat hangar, but as they are about to reach it, they encounter a team of ZPCI soldiers, sent to eradicate everything to do with the research on White November. One of them shoots Louis, and in a vengeful frenzy Sonny kills them all. As Louis lies dying in Sonny's arms, he hands him a tape, telling him: "It's a tape. Maybe it can help you." He then breathes his last breath, and Sonny escapes alone on a speedboat as ZPCI helicopters search the ship. He then lands on a coastline named Ishiguro's Rest and fights numerous zombies as well as ZPCI operatives. He meets Veradux, another intelligent zombie, there after helping him fight off ZPCI hunters.

The two of them continue onwards with Sonny in search of answers and Veradux deciding to tag along, and make their way to Gadi'Kala, the Great Plains. There, they encounter an aggressive shaman tribe that refuses to allow them to pass. While mowing their way through the tribe, they experience headaches and disorientation, Sonny in particular, while fighting zombies named Devourers; the cause soon reveals itself as a Zombie Ambassador approaches them, stating that he is a servant of the zombie overlord Baron Brixius, who requests they submit to his control. The duo refuse and kill the ambassador then proceed forward, running into a trio of specialised ZPCI soldiers who are on their way to assist their leader in his battle against the Baron. Sonny and Veradux kill them and take their place in the battle between Galiant The Paladin and Baron Brixius, with Verdux urging Sonny to go along with pretending to be the Paladin's backup. After defeating the Baron, Veradux turns on the Paladin knowing the ZPCI's stark opinion on zombies and pressures Sonny into it for that reason, as Sonny is conflicted about doing so since the ZPCI leader helped them. Sonny eventually gives in and takes down the Paladin together with Veradux.

In Sonny 2, the duo is shown to be travelling on aimlessly, as Sonny tries to find something to play the tape with. When the two are camping out, they were suddenly attacked by a female motorcyclist, who slams her bike on Sonny and throws a knife in Veradux's face. Their assailant, Felicity, then grabs Sonny's tape and rides into a nearby prison, New Alcatraz. The duo pursues her and enters the facility.

In New Alcatraz, a riot has broken out between the guards and the prisoners, and the duo fights through both. It is revealed that the prison is grounds for a ZPCI operation that involves cruel experiments on prisoners, turning them into bloodthirsty monsters under the control of scientists. The duo takes down ZPCI Elites, the prison's Head Warden, guards and scientists before finding Felicity, who is trying to escape in a car. Veradux disables the car with an electric shot from his rifle, and Sonny demands the tape back. Felicity challenges his claimed ownership of the tape, and says that the tape is 'the key to Utopia'. Sonny doesn't understand, and initiates combat. When Felicity is close to being defeated, she stabs Veradux in the face again, tossing the tape and distracting Sonny before she flees in an elevator, carrying an unknown body.

The duo then enters Felicity's car, which has a tape player. To Sonny's dismay, the tape only plays the song "You are my Sunshine", and infuriates him. Veradux jokes that maybe Felicity just really loves that song. Sonny then finds a map (with a trail leading to a big X), and then begun driving the car to find the Utopia that Felicity mentioned.

The car breaks down at Oberursel, and the duo is forced to continue on foot. There, they encounter zombies, insurgents and members of a cult. After exchanging blows with some insurgents, the insurgents realize that Sonny and Veradux are 'not like the others' and are intelligent zombies, and says that they are not enemies. The Insurgents, one of them Roald, explains that they came from Utopia, where they were trying to search for a cure for zombification, but were disrupted by random kidnappings and killings, and fled to Oberursel. In the area instead they find a cult who sacrifices innocent people. Sonny asks for the location of Utopia, and Roald bargains that if they help to take down the cult, he would join the duo and lead them there.

The trio then begin pushing into the cult's stronghold, eventually reaching the leader. When fighting the leader, Sonny begun experiencing pain in his head - pain which is very familiar to both Sonny and Veradux. The Cult Leader then reveals himself to be Baron Brixius from Gadi'Kala, who has somehow escaped death and set up another point of conflict for his own enjoyment. The trio then takes down Baron Brixius, who is still suffering from injuries that he sustained in their previous battle. The cult members, seeing that their leader is a zombie, become disillusioned and abandon the cult. Then, ZPCI helciopters begin entering Oberursel, and started firing on the various entities in the area. The trio then fights some ZPCI units before facing a Captain Hunt and his team, who orders everyone in the area to be killed. After an extended battle, Roald brings the group into the Ivory Line to evade the ZPCI.

Sonny's personality is a bit difficult to pin down due to the nature of the Sonny series, but the following can be inferred from the information given. Sonny is shown to be somewhat of a joker, but easily shifts to his more serious side when his friends are in danger. This causes his allies to place great faith in him as he always will act in their defense if he is angered and they are in danger. This trait seems to give him some romantic sway over Felicity, who describes him to be a sort of knight like figure in battle, who always comes to his friends' rescue and follows his heart no matter what. She sums up her view of him as being "a sort of undead Sir Lancelot". He is often heard having an exasperated tone of voice even in fights, and even jokes about his enemies as a way of relieving his tension. Sonny also finds some serious events as fodder for humor. An example of this is when Felicity is encountered in Hew. Remembering that in their previous encounter, Veradux was hit in the cheek with a knife, Sonny replies, "Quick! Cover your face!!"

Sonny is quite the conflicted character outside of battle due to his confusion about his identity and history, causing him to take drastic action at times for the possibility of getting answers. This also manifests as a somewhat stronger, compared to Veradux, weakness to mind control. Sonny can also be rather fatalistic sometimes when people are in his and his friends way, showing disregard for their lives if they try to cause him problems.

Sonny is the primary protagonist in the Sonny RPG series, and he gains experience along with party members after every fight. Sonny levels up after gaining sufficient experience. Every level-up grants Sonny Ability Points and Attribute Points, which can be used to activate upgrades.

Ability Points are used to unlock or improve Abilities, which are based on Sonny's class (see Classes). Abilities are used for powerful attacks, healing, or to temporarily improve/reduce a character's Attributes.

Attribute Points are used to improve Sonny's 4 basic Attributes, consisting of Vitality, Strength, Instinct, Speed. The fifth Attribute, Focus, cannot be improved with Attribute Points in any game. The importance of attributes various depending on Sonny's class.

Sonny also has a range of Piercing and Defense attributes, such as Lighting, Fire, Ice, and so on. Some special equipment contain bonuses for such attributes, that improves attacks of that type.

Sonny can wear/wield different kinds of equipment. Before a fight, players can modify the equipment configuration, or visit the Zone Shop to trade equipment. Also, certain enemies drop rare equipment that cannot be purchased at shops.

Before a fight, players can select a ring of 8 Abilities (the "Combat Action Bar") that can be used during a fight. Certain powerful abilities can be added multiple times to the ring, allowing for usage in successive turns.

During a fight, the player can only control Sonny directly. The player can choose an enemy to attack, as well as an ability from the ring to attack/defend with. Certain abilities affect Sonny and party members (such as healing abilities) and certain can only be used on enemies (defensive and offensive abilities).

The following is a list of the classes for Sonny, in Sonny 1. Players can only select a class at the beginning of the game. Click on a class to learn more about the Equipment it supports. 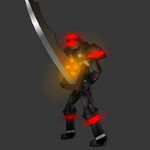 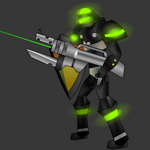 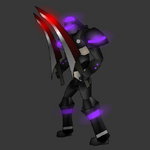 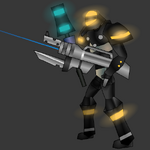 The following is a list of the classes for Sonny, in Sonny 2. Players can only select a class at the beginning of the game. Click on a class to learn more about the Abilities it offers. 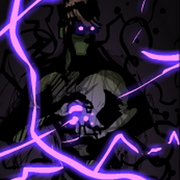 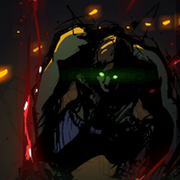 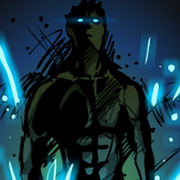 The following is a list of strains in Sonny (2017). Strains replaced classes in the game and Sonny is stuck with the physical strain until a certain point of the game where the player can choose their desired strain. 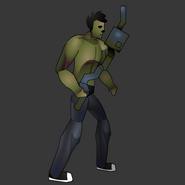 Sonny in default equipment in Sonny 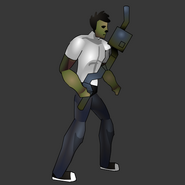 Sonny in default equipment in Sonny 2

Sonny in default equipment in Sonny (2017)

Sonny appears at the end of Sonny 2

Sonny without any clothes or items on

Sonny wearing armor
Add a photo to this gallery

Retrieved from "https://sonny.fandom.com/wiki/Sonny_(Character)?oldid=23118"
Community content is available under CC-BY-SA unless otherwise noted.