Start a Wiki
Psychological (German: Psychologisch) is a class in Sonny 2. Players that use the Psychological class use abilities that deal either Lightning or Shadow damage, using Instinct as almost their only co-efficient. Only three Shadow abilities are based on Strength, namely Dark Infusion, Corruption and Nerve Shock.

The Shadow build focuses on lowering enemy defenses and maximizing the use of debuffs that give Damage-Over-Time (DOT). It is mostly indirect, and takes several turns to deliver maximum damage output. Once at peak, however, it becomes threateningly high. Builds that focus on this tree are known in the community as "shadow psycho" builds.

The Wraith is a notable contrast to that of the Psychopath; it centers on high and direct damage output and immediate Focus regeneration. It is important however, to note that some of these skills consequentially empower opponents, giving them an opportunity to retaliate. Builds that focus on this tree are known in the community as "shock" or "shocker psycho" builds. 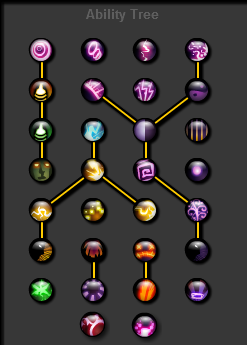 Retrieved from "https://sonny.fandom.com/wiki/Psychological?oldid=22745"
Community content is available under CC-BY-SA unless otherwise noted.