Felicity is a female zombie that first appears as an antagonist at the beginning of Sonny 2 when she steals the tape from Sonny. She later reappears as the boss of New Alcatraz, fiercely determined to keep the tape from returning to Sonny. However, when she is losing in combat, she tosses the tape back to Sonny and escapes, but not before hurling a knife into Veradux's face (for the second time). She then escapes, carrying a body of an unknown individual and bidding farewell to the duo.

She can ride a motorbike well and has a fondness for using throwing knives in combat. The fact that she consistently ends up throwing a knife into Veradux's face almost every time they encounter her is a recurring joke throughout Sonny 2.

Felicity reappears in Hew at Stage 5, offering her skills as she also wishes to see the Mayor overthrown. Later on in the stage, a cutscene between Felicity and the Mayor reveals that the Mayor knew Felicity when she was alive (not as a zombie), and is immensely afraid of Felicity.

No evidence has currently been given for how Veradux and Felicity became zombies. The only known groups trying to find a cure for zombification were the Insurgents and the crew of White November, both of whom were attacked by the ZPCI. However, due to the existence of intelligent zombies such as Felicity, Baron Brixius, Sonny, and Veradux, one of the research teams must have been able to revive zombies at some point. It is possible that Felicity, Veradux, and Baron Brixius were revived by one of these teams.

At the end of Stage 4, a silhouette that looks like Felicity rescinds back after a body was dropped in during a worker's meeting. This final spark lit the fire that started the riots in Hew. Though it is not confirmed whether Felicity was actually the one who instigated the riot, it does coincide with her desire to see the Mayor of Hew overthrown.

Back when Felicity wasn't a zombie, she has been acquainted with the Mayor of Hew. At some point, the Mayor thought she was dead and did not expect her to return in Hew as a zombie. The Mayor is extremely afraid of Felicity, frantically calling for the ZPCI Ambassador to 'keep her away from me'. 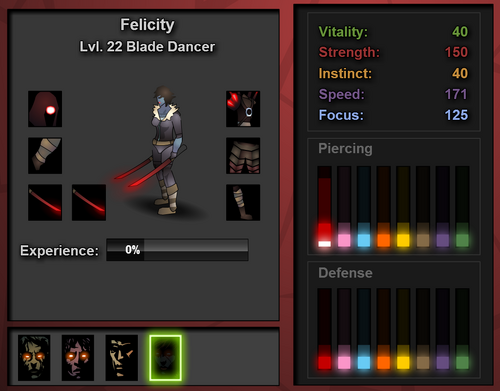 Felicity, as seen at the end of Sonny 2
Add a photo to this gallery

Felicity always begins her boss battle with the Blade Dance ability, which shields her. A physical attacker should focus on rushing her shield down, as breaking it prematurely will lower Felicity's physical defense.

Felicity's most common attack is Black Metal, which cuts down healing by 95%. This heavily impacts Veradux's ability to heal in combat. It is recommended for players to set Veradux's team command to be offensive so as to not let him waste heals.

When Felicity reaches 50% health or below, she uses Serious Business which halves damage taken and increases the damage she does. A player with burst or combo damage can choose to unleash their arsenal at when Felicity is somewhere above 50% health, so she would be easier to deal with after Serious Business. After using Serious Business, Felicity will also begin to use other abilities like Garrote (silences) and Shadow Blend (boosts speed).

However, if stunned when she is supposed to use Serious Business, she will be forced to wait until the stun ends before using Serious Business, and if the player can deal enough damage to push her HP into the next phase, where she uses Shadow Blend, a glitch occurs in which she completely skips using Serious Business, which makes the fight a lot easier. It is rather tricky to execute this procedure, and can usually only be done after beating the boss fight once and gathering some more powerful equipment.

It is recommended for players to use attacks that can't be evaded when Felicity uses Shadow Blend, as it can be difficult to hit her in that form.

The battle ends prematurely when Felicity reaches 10% health, though it is possible to outright kill her before that happens.

Retrieved from "https://sonny.fandom.com/wiki/Felicity?oldid=22895"
Community content is available under CC-BY-SA unless otherwise noted.