The Mayor/Boris Livingstone appears during Sonny 2 during Hew. He and Guardian Cannon are the final bosses of the zone.

Boris Livingstone was the appointed Mayor of Hew, before his death during the revolt at the hands of Sonny and his party. Not much is known about the Mayor's background, though it is evident that at some point he killed Felicity, or ordered her to be killed. He is surprised and horrified, therefore, when he sees her risen as a zombie during the revolt, and implores the ZPCI to protect him from her. 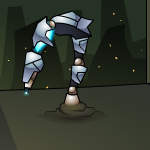 The Guardian Cannon guards The Mayor during the final stage of Hew.

Mayor's Buff
Add a photo to this gallery

Retrieved from "https://sonny.fandom.com/wiki/Boris_Livingstone?oldid=22979"
Community content is available under CC-BY-SA unless otherwise noted.